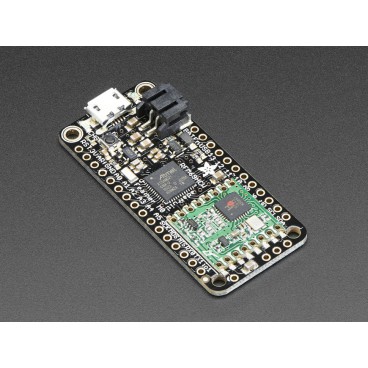 The Feather is the new development card developed by Adafruit and as its name suggests, Feather pen in English means, it's small, light and can you raise! It was designed to establish a new standard of small microcontroller. This is card Adafruit Feather M0 RFM69 Packet Radio (433 MHz), with a micro-controller and a radio module RFM69 HCW integrated as well as a charge battery and USB controller. It is a Fether M0 card with integrated 433 MHz radio e-mail to make it simple.

This Feather M0 card consists of a heart at base of processor ARM Cortex M0 ATSAMD21G18 clocked at 48 MHz and with 3, 3V, the same logic on the maps Arduino Zero. The circuit has 256K of Flash and 32K of RAM and it has built-in USB connectivity.

In order to realize mobile montages, this card has of a built-in connector JST dedicated battery Lithium polymer 3, 7V with a charging circuit minimum 500mAh for this Feather card. If you do not need battery, simply feed it through the micro-USB with a source delivering 500mA connector. The Feather card will automatically switch between USB power and the battery if needed.

Characteristics linked to the M0