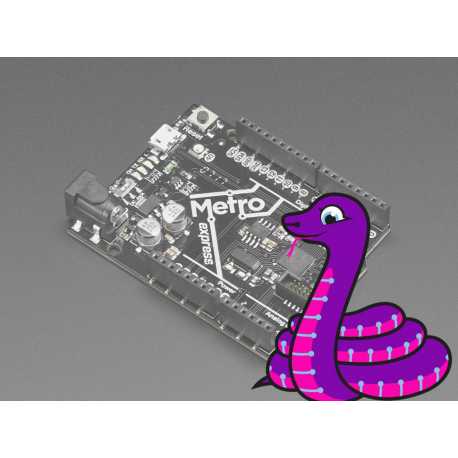 A Metro card for use with CircuitPython

Metro is the series of microcontroller cards to be used with the Arduino IDE from Adafruit. This new Metro M0 Express card looks a lot like the original Arduino UNO card, but with a huge upgrade. Instead of the ATmega328, this metro card has an ATSAMD21G18 chip, an ARM Cortex M0+. This is the first metro card designed for use with CircuitPython! CircuitPython is our prefrence for beginners of MicroPython - and as the name suggests, it is a small, complete version of the Python programming language specifically used for circuit boards and electronics.

Not only can you use CircuitPython, but the Metro M0 is also usable in the Arduino IDE.

This does not mean that you will not be able to use it with Arduino IDE! At the heart of the Feather M0 board is an ATSAMD21G18 ARM Cortex M0+ processor, running at 48 MHz and with 3.3 V logic, the same processor that is used in the latest Arduino Zero. This microphone has a huge 256K Flash (8x more than the Atmega328 or 32u4) and 32K of RAM (16x more)! This card comes with built-in USB connectivity, so it has built-in USB-debugging and program capability without the need for an FTDI chip.

Power the METRO Mo with a 7-9V DC protected power supply or via the USB micro connector with any 5V USB source. The DC 2.1 mm plug has an on/off switch next to it. The METRO card automatically switches between USB and DC.

The METRO board has 25 GPIO pins, including 12 analog inputs and a true analog output. There is a hardware SPI port, an I2C hardware port and a hardware UART. Logic level is 3.3 V

Native USB, there is no need for a USB / serial converter as the Metro M0 card has built-in USB support. For serial devices, the USB interface can be used by any computer to listen / send data to the METRO and can also be used to launch and update code via the bootloader. It can also function as a keyboard, mouse or MIDI device.

Four indicator lights and a NeoPixel are present on the PCB for easy debugging. One green power LED, two RX / TX LEDs for data sent via USB and one red LED connected. Next to the reset button, there is a NeoPixel RGB that can be used for any purpose.

A 2 MB SPI Flash memory is integrated. You can use Flash SPI storage as a very small hard drive. When used in CircuitPython, the 2MB flash acts as storage for all your scripts, libraries and files. When used in Arduino, you can read/write files, such as a small datalogger or SD card, and then, with our helper program, access the files via USB.
Delivered fully assembled and tested, with a USB bootloader that allows you to use it quickly with the Arduino IDE or for loading CircuitPython. Supplied with two non-welded connectors for easy connection to a breadboard.

Note that CircuitPython is still in beta and that Adafruit is working to make it great! So use one of these M0 Express if you want to try it out or maybe even help us find bugs and make improvements!

Here are some practical specifications: