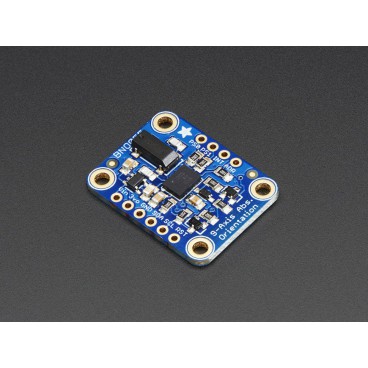 If you have already ordered and used a 9 DOF sensor, it is likely you have also realized the challenge to transform data from the accelerometer, gyroscope and the magnetometer in true orientation in 3D space! The orientation is a difficult problem to solve. The algorithms of fusion of sensors (the secret sauce that mixes the accelerometer, magnetometer, and the gyro output of orientation data stable three-axis) can be difficult to calculate and implement in real time at low cost systems.

Bosch is the first to meet this challenge by taking a MEMS accelerometer, magnetometer, and a gyroscope and putting them on the same matrix with a processor ARM Cortex-M0 finally to digest all the sensor data high-speed, merge data with real-time requirements.

Rather than spending weeks or months to handle variable accuracy and complexity algorithms, you can get sensitive data in a few minutes thanks to the BNO055 - a smart sensor to 9 DOF that makes the fusion of sensor data alone! You can read the data directly on I2C.

The BNO055 can issue the following sensor data:

This sensor has its own regulator 3, 3V and adaptation level logic for Reset and I2C, pins as well as an external crystal 32, 768KHz (recommended for best performance) and certain other pins that you might find handy were wired.

Delivered assembled and tested, with no welded header connector.