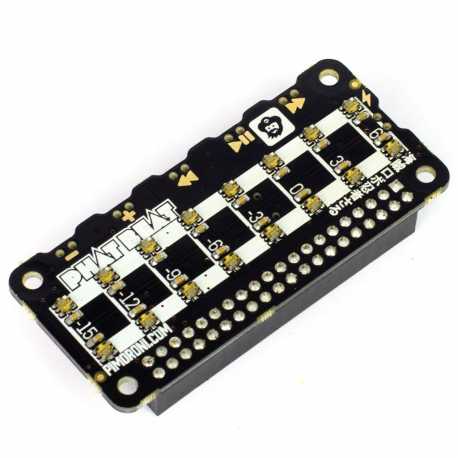 The ultimate audio add-on for your Pi! pHAT BEAT gives you high-quality, digital, amplified, stereo audio and 16 beautiful little RGB LEDs, in two rows of 8, that are ideal as a VU meter, and 6 buttons to control your audio.

The ultimate audio complement for your Pi! pHAT BEAT offers you high quality stereo, digital, amplified and stereo sound and 16 beautiful small RGB LEDs, on two rows of 8, which are ideal as a VU meter, and 6 buttons to control your sound.

We took the I2S mono DAC and amplifier we used on Speaker pHAT and Picade HAT and..... we added a second one for stereo quality. There is a small DIP switch at the bottom of the card that allows you to select either mono playback (left and right are mixed on both channels) or stereo playback. Clip-on terminals greatly simplify the wiring of your speakers.

The two rows of 8 APA102 RGB LEDs make the perfect VU meter, but can be coded to do whatever you want, such as displaying the steps on a Drum HAT or Piano HAT sequencer, or simply pulsating to the beat of time.

The six buttons on the edges of pHAT BEAT are connected directly to the GPIO, and can be used for whatever you want, although we have suggested some uses on the card, such as rewind, play/pause, fast forward, high and low volume, and power.

Use pHAT BEAT to create a great little radio for your office, to listen to music from your iPhone with Airplay, or to make it a Slack-controlled collaborative Spotify player for your office!

We have created a single-line installer so that your pHAT BEAT can be installed in the blink of an eye. It will reconfigure your ALSA audio to route it through pHAT BEAT and install our VU meter plugin to display volume levels in real time (although you can disable this function and code the LEDs yourself).