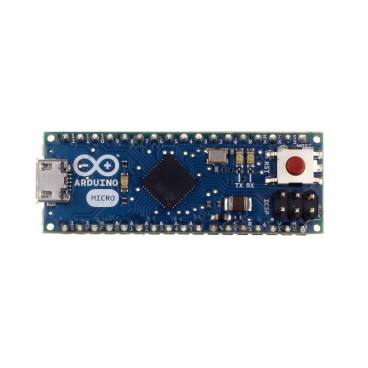 The micro version of the kit Arduino Leonardo.

The Arduino Uno is based on the ATmega328 microcontroller.
It has 14 digital input/kinds (of which 6 can be used as PWM outputs), 6 inputs analogue, a 16 MHz quartz oscillator, a USB connection, a power jack, an ICSP connector, and a reset button.
It contains everything needed to fly the microcontroller, simply connect it to a computer with a USB cable to use it simply.
Uno differs from all previous Arduino in the fact that it does not use the FTDI USB-serial converter. Instead, it has an Atmega8U2 programmed as a USB-serial converter.

The Arduino Micro is the ATMega32U4 microcontroller-based it's a compact version reduced the Arduino Leonardo.

It has 20 digital inputs/types (whose 7 can be used as PWM outputs), 14 analog inputs of an oscillator quartz 16 MHz, a micro USB, an ICSP Connector connection, and a reset button.